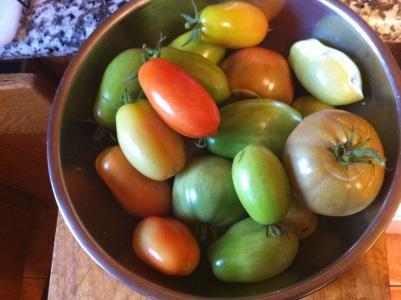 Given that daytime temperatures here in Portland have been struggling to reach 60 degrees, I’m finally calling it on our tomato plants. I’d like to say they had a long and fruitful run, but I would be lying.

Every year I insist on growing obscure heirlooms from seed, and every year I find myself in utter despair at the sight of my friends’ and  neighbors’ fecund hybrids; pound upon pound of enormous tomatoes from starts they bought for $2.49 at the fucking grocery store. Will I learn my lesson next year? Probably not.

Anyhow, there are only so many applications for fried green tomatoes, and as you can see above, not all of the tomatoes I collected were capable of yielding large, meaty slices. So, enter the greatest equalizer in the cooking arsenal: soup. You can make it out of just about anything. This recipe is adapted from one in “New Classic Family Dinners” by Mark Peel of Campanile restaurant in L.A. Would I recommend this book on the whole? Not really. (It’s kind of Silver Palate meets aspirational cruise-ship dining—veal piccata, pot au feu, clams casino, that sort of thing.) But there are some winners, including a recipe for beef-and-beer stew that bakes with thick, Dijon-slathered slices of country bread on top, and this soup, which happens to be much more filling than it sounds.

You may be wondering why there’s no picture of the finished product. The main reason is that it’s not very photogenic; the most charitable description I can come up with is “aged split-pea soup.” (If you have kids who for some reason are even willing to eat this in the first place, you may want to double the amount of bacon and bread toasts.) The secondary reason is that I had worked off-site all day and was so tired and flustered by the time I got home and had finished cooking that I forgot to take a picture. Honesty: you has it.

Cook the whole strips of bacon in a large soup pot over medium-low heat until they have rendered much of their fat but aren’t yet crisp. Add onion, celery, garlic, leek, and a pinch of salt and cook until softened.

Add the cumin, oregano and pepper flakes and cook until fragrant; then add the green tomatoes, 1 T sugar and another pinch of salt. Cover and cook over medium-low heat until the tomatoes soften and begin to break down. This took about 25 minutes.

Add the chicken stock and water and simmer, covered, over low heat for about 30 minutes. Toast the bread slices.

Remove the bacon strips. (You can cut them up to use as more garnish if you don’t mind flaccid and tasteless pieces of meat in your soup. I mind; my husband does not.) Blend the soup with an immersion blender (or in batches in the blender), then push through a strainer so it’s not overly chunky. Reheat until hot, add salt and sugar to taste.

Top with bacon and bread slices.