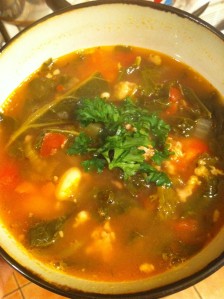 This hearty yet light-tasting soup is a great way to get kale into the mouths of people who think they don’t like kale. I know, because I used to be one of them. (I’ve always had trouble with the musty, almost farty taste of veggies from the brassica family.) Not only does the overwhelmingly large pile of greens cook down to almost nothing, but the taste of sausage and tomatoes is strong enough to overpower any suspicious cooked-kale flavor that might still be lurking, menacingly, like a black widow in the basement.

I prefer to use flat-leafed lacinato/dinosaur kale for this, as curly kale takes forever to clean and doesn’t look quite as nice in soup. However, I was lucky to find kale at all at our shameful excuse for a grocery store, let alone lacinato kale, so curly is what you see here.

This recipe makes a TON of soup, which will last more than several lunches and dinners in a row. (Thankfully, since today is Halloween and as a card-carrying misanthropic hermit who hates children and costumes, I need even more help than usual in pretending I’m not home, which includes staying out of the kitchen.) While the soup is very good, for the sake of variety I recommend freezing it in 1-cup portions for future meals.

This soup follows pretty basic vegetable-soup protocol—brown the sausage in a soup pot, remove sausage to a bowl, cook garlic in sausage drippings and olive oil until fragrant, add mirepoix (the soup trinity of onion, carrot and celery, at left, illuminated for photographic purposes with the LED flashlight we use to pick up our dog’s poop when we take him out at night…the things I do for my art) and cook until translucent, add everything else including reserved sausage, and simmer for about an hour, or, if you used semi-cooked dry beans as described above, until those are tender. (Be sure to taste at least 4 or 5 beans; usually I’ll think they’re done only to have the third or fourth bean still be hard.)

Also of note is the fact that, because I was out of chicken soup stock, I used defrosted cheese broth enhanced with a few teaspoons of Better Than Bouillon base. This is the first time I’ve used mostly cheese broth as a soup base, and the results were excellent, so I’m again taking this opportunity to plug its usefulness. If you ever buy Parmigiano-Reggiano, save those rinds in the freezer!

This entry was posted in recipes and tagged beans, kale, sausage, soup, under $1. Bookmark the permalink.