The principles of turkey brining 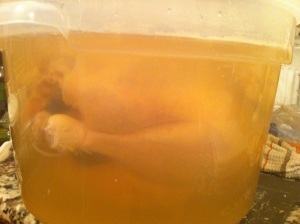 I know, I know; a little late given that today is Thanksgiving. But this information might be useful for next year, and with all those turkeys likely to go on sale in the next couple of days, why not pick one up to cook in a few months?

Odds are if you’re in the U.S., celebrate Thanksgiving, and are looking at anything even remotely cooking related on the Internet, you already brine your turkey, or are at least aware of the benefits. It really does make a difference, although what most people don’t know is that the majority of big-brand turkeys already come pre-brined. Unfortunately, this isn’t so much to help you, the cooker of the turkey, as it is the company, since turkeys are sold by weight and plumping up the meat with saltwater solution increases profit margin.

In fact, it’s quite difficult to find a turkey that isn’t pre-brined, or at least injected with some sort of salt solution—you’re probably left shopping at a natural-foods store, or buying directly from a farmer. But brining a turkey yourself gives you more control over the chemical properties of the brine itself, as well as avoid additives and preservatives. Some argue that flavoring the brine makes no difference, since the osmotic principles that make brining effective involve molecules too small to include flavorings; others argue that the water absorbed by the turkey can indeed impart flavor. I’ve never tried a side-by-side comparison, but I lean toward the first argument. 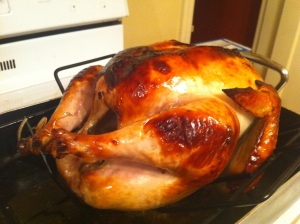 This year I made two turkeys. (Needless to say, Thanksgiving does not make for a $35 week, although the leftovers do help mitigate some of the damage.) One an all-natural Diestel that I brined myself and roasted the traditional way (finished product, at left), the other just a plain ol’ mass-market Foster Farms bird that I smoked over apple-wood chunks in a Weber Smokey Mountain. (Photo below. Those are sage leaves under the skin.) They’re both good, but the roasted one was just a little bit juicier, thanks to my ability to control the brine. 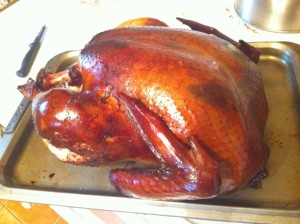 There are almost as many brine recipes as there are people, but the most important principle is the ratio of salt to water. (Sugar is optional, but it should always be equal in weight to the amount of salt in order to balance the overall salinity of the mixture.) Too much salt and too little water, or too much time in the brine, and your turkey will be inedibly salty. The tissue will also have begun to break down, resulting in a mushy texture. Always weigh your salt rather than measure by volume, as a cup of kosher salt (the grains of which are hollow, if you look at them through a microscope) weighs quite a bit less than table salt. If you don’t have a scale, a good volumetric ratio is 1 1/2 cups of kosher salt to 1 gallon water (and 1 cup optional sugar, since sugar weighs more than kosher salt). Feel free to add spices and other doodads, but again, I personally don’t think it makes a difference. Be sure the brine solution is totally cooled before adding the turkey, and make sure it stays below 40 degrees at all times, which means either keeping it in the fridge, or in a cooler on ice.

This entry was posted in basics, FYI and tagged turkey. Bookmark the permalink.

One response to “The principles of turkey brining”