It pains me to say this, as I like junk food just as much as (if not more than) the next person, but Americans gave quesadillas a bad rap. Somewhere along they line they became insipid flour tortillas packed with enough rubbery cheese to kill a small animal; an oversized, flavorless health hazard any reasonable person would feel deeply guilty for eating. These flavor-packed, fresh-tasting, polite-sized versions are what I imagine quesadillas were originally intended to taste like. It’s not about the cheese, but about balance.

This recipe is adapted from my new favorite book, “Plenty” by Yotam Ottolenghi (mentioned in today’s New York Times Magazine, coincidentally), and has henceforth ruined me for all other quesadillas. Everything from the bean paste to the salsa to the sprinkling of pepperoncini (Ottolenghi recommends pickled jalapeños, if you have them) practically explodes with flavor; in fact, you could probably omit the cheese altogether and no one would notice.

I also highly recommend making your own corn tortillas; the store-bought ones are often so dry as to be almost inedible, and making your own is not only super-cheap, but super-quick. If you don’t have a tortilla press you could always roll them out with a rolling pin, but tortilla presses aren’t very expensive and, in my opinion, well worth the time savings.

*One recipe tester described this as being “a little too twangy” with the rest of the ingredients and suggested halving it. It’s just right for my taste, but if you’re sensitive to acid, I definitely recommend using less.

*To make tortillas, combine the flour, salt and masa, knead until a soft dough forms. Divide into 16 equal pieces and press in a tortilla press between two pieces of parchment paper. Peel the tortilla off the parchment and cook on an ungreased griddle or skillet over medium-high heat, about 50 seconds per side. Remove to either a tortilla warmer or wrap in a towel to keep warm and pliable. 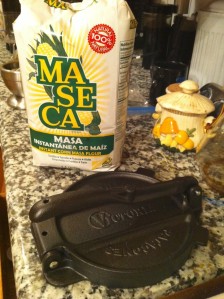 Put all ingredients for black bean paste in a food processor and process to a paste.

To assemble: Spread bean paste on one tortilla, leaving about 3/4 inch clear around the edge. Spread on a bit of sour cream. Sprinkle a little bit of cheese onto the sour cream, spoon on some salsa, and top with the pepperoncini. (But do it over the whole tortilla, not half, as shown below.)

Top with another tortilla. Cook each quesadilla on a griddle or skillet over medium heat, about 3 minutes per side.

Serve topped with a little of the salsa.

This entry was posted in recipes and tagged beans, cheese, cilantro, Mexican, tomatoes, tortillas, under $1, vegetarian. Bookmark the permalink.

One response to “Black bean quesadillas: 58 cents each”