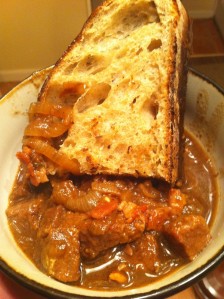 I admit I haven’t always been a fan of beef stew. It’s always seemed a little bland and greasy, full of extraneous vegetables that are either overcooked or undercooked and served with some kind of boring, regimented starch like egg noodles or mashed potatoes. But yet, I like the idea of beef stew, especially on nights like tonight, with temperatures in the 20s and a hearty dose of Portland’s renowned bone-chilling dampness.

This has been my go-to beef stew recipe for a few years now; I think the original version came out of Mark Peel’s “New Classic Family Dinners” (at least, its Flemish identification did), but even if that were the case I’ve tweaked it enough that Peel himself probably wouldn’t recognize it.

If caramelized onions layered with beef and bacon, cooked in dark beer until falling-apart tender and topped with a crusty layer of Dijon-slathered country bread doesn’t sound good to you, we will never be friends.

As below, this makes 4 very generous servings.

Heat a large skillet over high heat (you’ll be using a 3-quart dutch oven to bake the stew); add the canola oil. Lightly dredge the beef cubes in flour and, working in 2 or 3 batches, brown them on all sides. You don’t need to cook them; just get some flavor on the outside. Remove to a bowl. 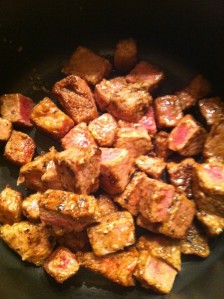 Let the skillet cool a bit. There will probably be some burnt-flour bits in the bottom; I usually scrub them out with water and a dish scrubbie before proceeding.

Over medium heat, cook the bacon until a lot of the fat has rendered out but it’s not yet crisp. Remove to the bowl with the beef, stir to combine. Add the butter to the skillet; once the foaming has subsided, add the onions, brown sugar and about 1 tsp salt. Reduce the heat to medium-low and caramelize until light brown, about 20 minutes. This is also a good time to portion out the beer; it will be quite foamy and difficult to measure at first, so it needs some time to calm down. 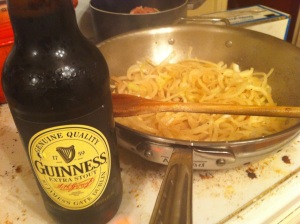 Preheat oven to 350 degrees. When the onions are browned, deglaze the pan with the cider vinegar and stir well, continuing to cook until all the liquid has evaporated. Deglaze the pan again with the beer. Add another teaspoon of salt and bring to a boil; remove from the heat.

Using a skimmer or slotted spoon, remove 1/3 of the onions to the dutch oven, and spread out evenly on the bottom. Add half of the beef-and-bacon mixture, spread evenly. Repeat with another third of the onions, and spread the other half of beef and bacon over the top. Top with the rest of the onions; pour the beer liquid over the top and nestle the bouquet garni into the center. 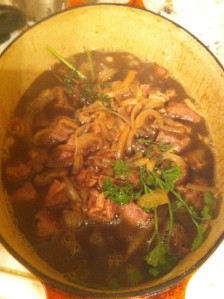 Bake for 2 1/2 hours at 350 degrees. Then remove the lid and replace it with a layer of slices of good-quality thick bread that have been spread with Dijon (mustard-side down). Put the pot back in the oven for 20 more minutes. 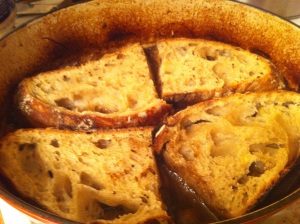 Serve with more bread for sopping or even a regimented starch, if desired. Keep in mind the stew gets exponentially better the longer it sits, so if you have opportunity to make it a few hours ahead and reheat it, do so.

This entry was posted in recipes and tagged beef, beer, bread, onions, stew, under $3. Bookmark the permalink.