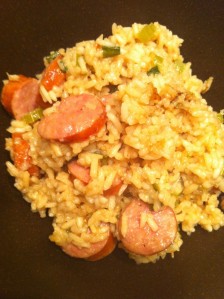 Note: This is another guest post by my husband, B. If I had come across this recipe on my own I probably would’ve rolled my eyes at the canned soup and “jambalaya” classification (because I’m an asshole, you see), but not only does this dish hold sentimental value for being the first of three—now four—things he’s ever cooked for me, it’s actually really good, and really easy. Probably easier than any recipe on this entire site.

According to K., not only have I cooked only three times in our relationship, but this meal here is one of those three previously made. So, I can’t move the invisible counter any higher—repeats don’t count. Nonetheless, this daisy of a dish from my grad-school days in Louisiana is sure to treat you right on a cold night when you don’t want your cooking time to be longer than your prep time.

(You could add just about anything you want.)

In the rice cooker container, mix all ingredients. 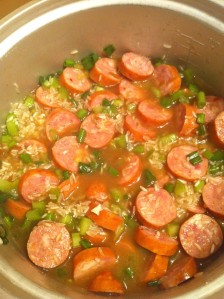 Hit the start button on your rice cooker. 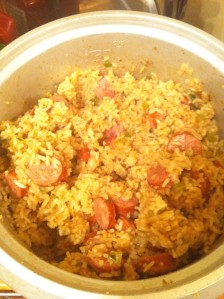 Once it’s done, you can plate it and add your own lagniappe. I’ve been known to top mine with a little dash of Tony Chachere’s.

This entry was posted in guest post, recipes and tagged quick, rice, sausage, Southern, under $2. Bookmark the permalink.