No need to sugarcoat it, although the inclusion of both brown rice and lentils probably gives it away: This is hippie health food. I wouldn’t advocate serving it to die-hard, meat-at-every-meal carnivores, but I wouldn’t advise against doing so, either, because this stuff is good. In fact, if you’re serving it to mixed company, it might behoove you to admit right off the bat that it’s hippie health food because people probably won’t believe you. Did I also mention that it doesn’t really even taste like lentils? And that it only costs 25 CENTS A SERVING?? In other words, you’re only hurting yourself if you don’t try this.

The recipe is adapted from Faith Durand’s Not Your Mother’s Casseroles, which I continue to be embarrassed to own but can’t stop using. So long as you can get past the name and “casserole” conceit, it really is a great book.

It makes 4 servings, or 2 with seconds. The amount of broth below may seem like a lot; indeed, the end product is closer to a stew than a pilaf, so if you want a drier texture, you may want to reduce the amount by a cup or so.

Heat the olive oil in a large skillet or sauté pan over medium-high heat. Add the butter (supposedly the oil coats the milk solids in the butter and keeps it from burning), heat until foaming, and add the onions and 1 tsp salt. Reduce the heat to medium and cook for 30 minutes, stirring often but not constantly. You’re going for a kind of caramelized-fried combo, so don’t be afraid to get them really brown. Below is after about 20 minutes:

Bring the broth or stock to a simmer in a medium saucepan. When the onions are dark brown, deglaze the pan with a splash of stock, making sure to scrape up all the browned bits on the bottom. Transfer contents to the baking dish. Stir in the lentils, rice, pepper (I used about 1/2 tsp, but feel free to add more), cinnamon, cumin, and the rest of the stock. Add additional salt to taste. 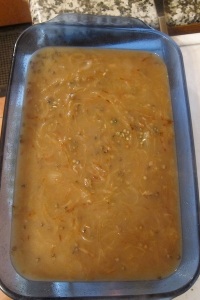 Cover with foil and bake for 60-75 minutes, until rice is tender, stirring a couple times during cooking to ensure everything gets absorbed evenly. Let sit for 5-10 minutes, serve sprinkled with parsley.

This entry was posted in recipes and tagged lentils, Mediterranean, rice, under $1, vegan, vegetarian. Bookmark the permalink.