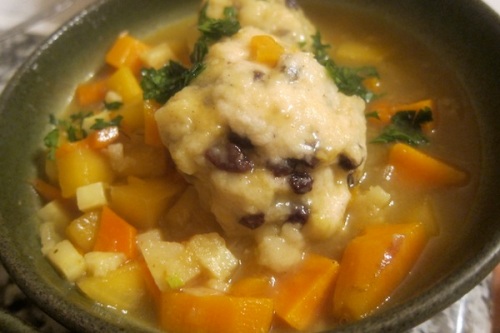 To be honest, the only reason I even wanted to try this stew was because, unlike the similar root vegetable cobbler I made back in November, it called for my three favorite root vegetables of all time: sweet potatoes, parsnips, and celery root. Unfortunately, momentary amnesia precluded me from remembering where we shop, because of course our grocery store doesn’t have celery root. Did you know this very store that I complain about at least once a week was actually featured a few years back in a somewhat famous photograph, held up across the Internet as an example of All That Is Wrong With This Country? What it lacks in things like porcini, mint (seriously, this store DOES NOT EVEN CARRY MINT), and celery root, it makes up for in six different kinds of Cheez-Its and half an aisle devoted to artificially flavored pudding. So, in a moment of duress and frustration, I grabbed a rutabaga.

Thankfully this stew is so good I probably could’ve used plain potatoes and it would’ve been fine, but I couldn’t stop thinking about how much better it would’ve been with celery root. If anyone tries it, tell me how it is.

Recipe adapted from The Essential New York Times Cookbook; it makes 4 generous servings servings. The curry sounds like a strange addition, I know, but it really does highlight the sweetness of the vegetables. 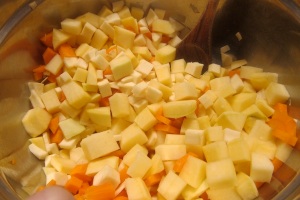 Melt the butter in a large soup pot with lid over medium heat. Add the onion and cook until translucent, about 5 minutes. Add the garlic and curry powder and cook until fragrant; probably less than a minute. Add the broth, carrots, parsnips, and rutabaga, if using (if you’re using celery root, add it later with the sweet potato), along with a pinch of salt, and bring to a boil. Reduce to a simmer, cover, and cook for about 15 minutes. Add the sweet potato and celery root, if using, and cook for another 10 minutes.

Meanwhile, combine the flour, baking powder, salt, and mace or nutmeg in a medium bowl. Rub the butter into the mixture with your fingers until pebbly, as if you were making biscuits. Mix in the currants, then the milk. Stir just until a cohesive dough forms. On a lightly floured surface, with floured hands, roll the dough into balls. 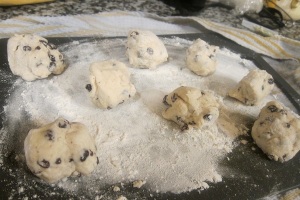 To make a thickener for the stew: Remove 1/4 of the simmering stew liquid and mix it into the 3 T flour. Stir well to make a paste, then stir it back into the stew. (Amanda Hesser, editor of the book, notes she was nervous about this step so late in the game. I was too, but it works well enough.) Season the stew with salt and pepper to taste. 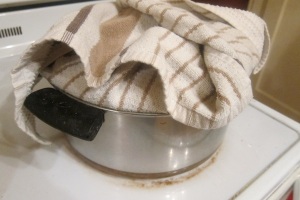 Simmer, lid on, for another 15 minutes, until dumplings are fluffy. 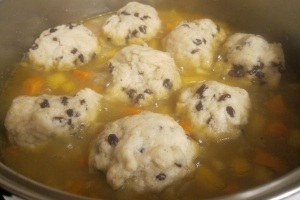 This entry was posted in recipes and tagged curry, fruit, parsnips, potatoes, rutabaga, stew, under $2, vegetarian. Bookmark the permalink.