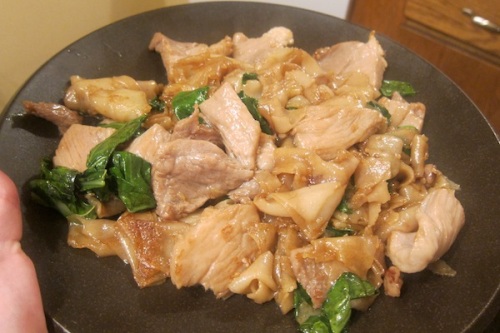 No matter how well-equipped or competent you think you are, there are some dishes that are just out of the home cook’s reach. Wide, flat Thai noodle dishes—pad see ew, pad kee mao, drunken noodles—are usually a few of them. Without a proper professional wok on a proper professional stove with a proper professional comfort with using ungodly amounts of oil, you’re just not going to create an identical version of what you can get at a restaurant. Obviously this bothers me to no end, as I’m not about to spend $8 on a container of what amounts to stir-fried meat and noodles, but I still do like these dishes. After three rounds of practice I’ve finally been able to make a version that, while not restaurant-perfect, is passable in flavor, texture, and appearance. It requires access to an Asian grocery store, but that’s about it—you can even make it on a crappy electric stove in a cheap nonstick pan. 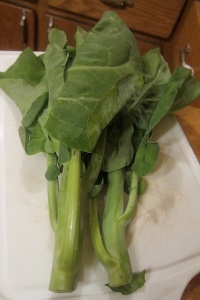 The amounts below are for one serving, because unless you have an enormous pan or wok, you should only be making one serving at a time to get a proper sear on the meat and noodles. Recipe adapted from She Simmers.

*This, admittedly, is hard to find. I was unable to find a bottle with any English on it, speaking further to the lack of pad see ew being cooked in American home kitchens. Look for anything called “sweet soy sauce” or “thick soy sauce.” In a pinch you could also add some sugar to regular soy sauce and cook it down until thick, but I have never done this, so I can’t give exact instructions. If you try it, let me know. 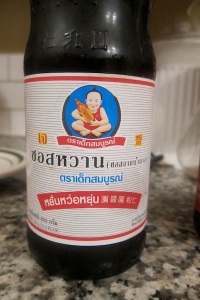 The first hurdle you’re going to face is the noodles. You could certainly use dried, but they don’t come in the appropriate width, and the texture isn’t going to be the same. If you want the real deal, you’re going to have to find a block of uncut rice-noodle sheets. Unless you live somewhere where they sell them fresh and unrefrigerated, you’re probably going to be stuck with a big, congealed block. I’ve tried both boiling the block and soaking it to get the noodles apart, and both times I ended up with a pile of gluey, torn-up pieces. This time I tried leaving the noodle block out for a few hours in a warm place (in this case in my bread “proofing box”—a little nook between the couch and heater vent) to see if the sheets became pliable on their own. 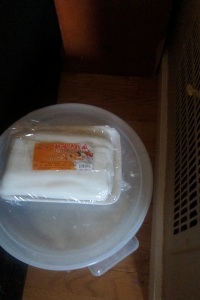 And, lo and behold, they did. To further them along at the end I microwaved them on low for a minute and a half or so, still in the plastic on their styrofoam tray. I then cut the sheets into the appropriate widths and got to peeling them apart. It took a while, but I was able to avoid washing off any of the oil they came packed in (it keeps them from sticking together), and they came out with the correct texture when cooked—not slimy or gooey. 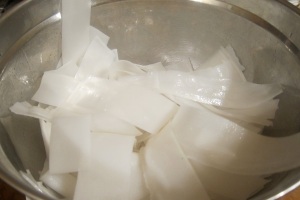 As for the meat, if you’re using a lean meat like pork loin or chicken breast, just marinate it in some soy sauce for 10 minutes or so. If you’re using a tougher meat, try adding a teaspoon of baking soda, but only leave it for 5 minutes or so. This denatures the proteins to make the meat soft and light, but leaving it too long will produce weird off-flavors and textures. As I mention above, it’s totally optional.

After the meat sits in its marinade, you’ll want to blanch it in boiling water before you get started, as it won’t be in the pan long enough to cook through. It should be just faintly pink in the middle. (The meat below is not yet done.) 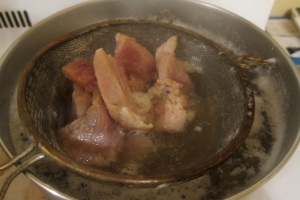 For the cooking process, you have three options: a real wok on a real stove, a well-seasoned cast-iron skillet on any stove, or a nonstick skillet on any stove. Obviously the wok is the first choice, but if this is your first time, I’d recommend the nonstick skillet be the second choice. While you won’t get as good of a sear, it’s a lot more forgiving, you can use less oil, and the noodles are less apt to stick to the bottom of the pan and each other.

Heat your pan over high heat. For a wok or cast-iron skillet, use at least 3 tablespoons of oil, preferably more; for the nonstick skillet use 2-3. When the oil is very hot, add the noodles. Stir them around so they become coated in the oil. Add the 2 T see ew sauce, again stir to coat the noodles. They will start to stick together, which is inevitable, but do your best to keep shaking them loose. Let them sit until they get a good sear on the bottom. Stir again and add the oyster sauce mixture, meat, and broccoli. Continue to stir-fry until meat is cooked through, about 2 minutes, again taking care to keep shaking the noodles loose while alternately letting them sit and get browned on the bottom. If they look like they’re starting to ball up too much (they will somewhat, but there’s nothing you can do), remove from the heat. Turn out onto a plate and serve.

This entry was posted in recipes, Thai and tagged broccoli, noodles, quick, Thai, under $2. Bookmark the permalink.