Now that the chickens are laying again, the specter of inferior soufflés has finally lifted. Not that the past two soufflés I’ve made with store-bought eggs weren’t good; they were just…well…inferior. The whites were harder to separate and took longer to beat; the base didn’t thicken as well with the pale, runny yolks; and the finished product just didn’t rise as high. In fact, you can see a dramatic difference between the first soufflé I made with store-bought eggs and both this one and the cheese soufflé I made before the chickens stopped in the fall. You may also remember that the one I made with cauliflower (also with inferior eggs) was paler and visibly less sturdy. If you’re intimidated by making a soufflé, don’t be—it only takes one or two tries to get it down, and it’s a quick, versatile, impressive dish to have in the arsenal. This soufflé can be made with any mushroom you have on hand or can find on sale, dried or fresh. I used dried shiitakes, which are dirt-cheap at the Asian grocery.

This makes one large soufflé in a 1 1/2-quart ramekin, or 6 small first-course soufflés in individual 1-cup ramekins. (Ramekins can be found at just about any kitchen store—in Portland both Kitchen Kaboodle and Sur La Table have them in every conceivable size.)

If you’re using dried mushrooms, make sure they’re fully reconstituted. Heat 1 T butter in a small skillet over medium heat. When foaming has subsided, add the shallots and cook until translucent, about 2 minutes. Add the thyme, mushrooms, and a pinch of salt, cook until mushrooms have released their liquid (if fresh) and are starting to brown, about 6-8 minutes. Remove from heat and set aside.

Preheat oven to 400 degrees. Thoroughly and evenly coat the inside of the ramekin(s) with the butter, then dust with the bread crumbs. Set aside.

Melt 3 T butter in a medium saucepan over medium heat. When the foaming subsides, add the flour and stir constantly until lightly golden, 2-5 minutes. Add the milk slowly, stirring the whole time, until the sauce is thick and smooth. Add the goat cheese and stir until melted. Stir in the mushroom-thyme mixture. Remove from heat. The base should be visibly thick but still thin enough to fall off a spoon. If it’s too thin, as it is here, cook for a little bit longer. If it’s too thick, thin it with more milk. (It’s not quite thick enough in the picture below.)

Separate the five egg whites into one bowl and add four of the yolks, one at a time, to the cheese base (discard the fifth yolk). Sometimes it’s easier to separate the yolks out into a bowl first. 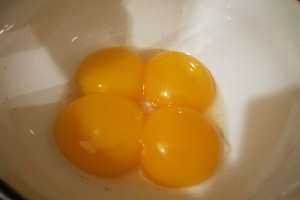 Below is the fully thickened base with the egg yolks. (Look at the color difference!)

There cannot be ANY yolks in the whites—not even a microscopic dot—or else the whites won’t fluff up when beaten. Believe me, I’ve tried to get away with even the tiniest speck you can imagine, and it didn’t work.

Add a pinch of cream of tartar to the whites (it helps stabilize the foam) and beat with either a handheld mixer or in a stand mixer with the whisk attachment until glossy and forming stiff peaks.

Using a rubber spatula, scrape about 1/4 of the whites out of the bowl and into the base to lighten it (be gentle; it’s better to have some white streaks than burst all the egg-white bubbles), then pour the lightened base into the empty spot in the bowl where you took out the whites. Fold the base into the whites gently with a rubber spatula until almost totally incorporated. The mixture should be foamy and fluffly. If not the soufflé will still be edible, it just won’t rise and will probably be wet in the middle. Pour into the prepared ramekin.

Put in the oven and immediately reduce heat to 375. (You just want to make sure the oven is hot enough for the initial rise.) Bake on the middle rack until the top is golden brown, about 25-30 minutes, depending on your oven. Slice in half, scoop it out, and serve immediately.

This entry was posted in French, recipes, spring and tagged cheese, eggs, French, mushrooms, soufflé, under $3, vegetarian. Bookmark the permalink.