As you may or may not be aware, chiles en nogada is the official dish of Mexican Independence Day, Sept. 16.  As you no doubt are very much aware, it’s currently March. But here in the land of eating on $35 a week, chiles en nogada is also the official dish of discount pork butt and spectacularly attractive and inexpensive poblano chiles found at the Mexican market. For those who have never had chiles en nogada, it’s a more sophisticated, nuanced and CHEAPER (minus all that cheese) version of chiles rellenos. The contrast of the sweet pork and fruit with the spicy poblano and creamy, nutty sauce is not to be missed. (For authenticity’s sake I’ll note that it usually has pomegranate seeds and not cilantro, so as to depict the Mexican flag, but no pomegranates could be found on sale.)

This particular recipe was based largely on one from Rick Bayless’ Mexico: One Plate at a Time TV show. It makes 4 servings (2 chiles per person), and I must say that the leftovers are wonderful as well. It’s a little bit of a project, but well worth the effort, especially if you’re a fan of sweet-savory combos.

• 8 large poblano chiles (these are unbelievably cheap if you have access to a real Mexican market): $1.90

*You’ll probably have to buy a plantain in advance and let it sit out for a few days. To speed up the process, put it in the bag with the apples, which emit ethylene gas—the same thing produce companies use themselves to ripen their bananas, tomatoes, and such.

Let’s get started: Add the pork cubes, half the diced onion, and garlic to a medium saucepan. Add just enough water (heavily salted) to cover. Bring to a boil, reduce to a simmer, and simmer, partially covered, for about an hour and a half, until the pork can be mashed against the side of the pot with a wooden spoon.

Let cool slightly. Drain, reserving the broth (and the onion mixture), and shred the meat.

If you have a gas stove, roast the chiles properly over the open flame. If you, like me, are stuck with the most painfully inefficient electric stove produced in the last quarter-century, try to roast them under the broiler element, pretending it’s an open flame. It won’t be the same, but you’ll still get some char on them. Peel the skin off (some of it came off and some didn’t for me; no big deal) and rinse under cold water. Make a slit in the side of each chile, keeping them as intact as possible, and carefully scrape out the veins and seeds.

Heat 1 1/2 T of the oil in a 12-inch skillet over medium-high heat. Add the other half of the onion, pork, and reserved onion from cooking the pork.

Cook until browned, about 10 minutes. Add the raisins, mango, pears, apples, thyme, marjoram, cinnamon, a generous pinch of salt, and a generous 1/4 cup of the reserved pork broth (save the rest for any application calling for chicken broth).

Reduce heat to medium-low, cover, and cook until apples are tender, about 10 minutes.

Meanwhile, in a smaller, separate skillet, heat the remaining 1 1/2 T oil over medium heat. Fry the slivered almonds until golden; this happens rather quickly, so be prepared to get them out fast to a paper towel-lined plate with a skimmer or slotted spoon. Once they’re out, add the diced plantain and cook until browned and slightly caramelized, about 5 minutes. Stir the plantains and almonds into the filling mixture.

Stuff the chiles with the filling. 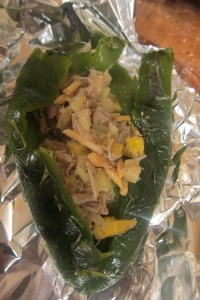 Try to re-form them in their original shape. Wrap them individually in foil and put on a cookie sheet. Keep in the oven for 30 minutes at 250 F to warm through.

Meanwhile, to make the sauce, put the walnuts, 1 cup of the milk, bread, sugar, sherry, ground cinnamon, and a generous pinch of salt in a blender. Blend until smooth. (You may have to stir it a few times to keep it moving. Add the rest of the milk as needed—or more, if necessary—to keep the sauce loose enough to pour.)

To serve, remove the chiles from the foil pouches, put on a plate, and cover with walnut sauce. Garnish with cilantro.

This entry was posted in fall, Mexican, recipes and tagged chiles, fruit, Mexican, pork, under $3, walnuts. Bookmark the permalink.