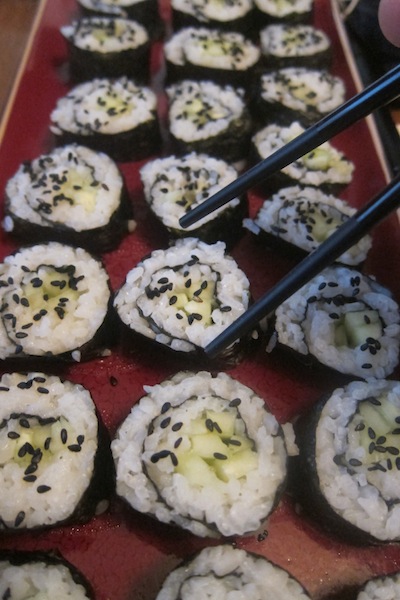 As I’ve mentioned before on this blog, I don’t like seafood. Every year I try once again to taste something “mild” that everyone claims “absolutely does not taste fishy,” and end up almost dry-heaving after feeling like I’ve trawled the harbor at low tide and taken a bite of everything that came up in the net. Tuna, fish sticks, shrimp—it’s all inedible to me. So, obviously, sushi has been and probably always will be a no-no. Having been dragged to sushi restaurants all the same, I thankfully discovered the wonder that is cucumber rolls. How on earth people could choose fish over crisp, delicious cucumber is beyond me. This is a fun, refreshing dish any time of year and quick enough to throw together on a weeknight.

The amounts can be scaled up or down quite easily. As below it made about 4 or 5 rolls, enough for a main-course serving for two people.

In a small saucepan, heat the 1 T rice vinegar, salt, and sugar over low heat, just until dissolved.

Cook the rice in your rice cooker, or however you usually cook rice (I use a 2x water-to-rice ratio for this). Transfer the rice to a bowl and pour the vinegar-salt-sugar mixture over it. Stir well to mix.

Combine the 1/3 cup vinegar, soy sauce, and sesame oil in a small bowl or two separate bowls for the dipping sauce.

Lay a sheet of nori on a dry surface. Spread out a thin layer of rice. 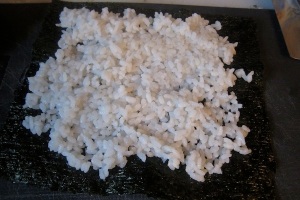 Layer some cucumber matchsticks about 1/2 inch in from the edge of the rice, then roll the nori up tightly into a cylinder. I like to do this while the rice is still slightly warm (but not hot), as it softens the nori and makes a tighter roll. With a clean, sharp knife, cut the roll into slices. Sprinkle the slices with sesame seeds, if desired. Serve with the dipping sauce.

This entry was posted in Japanese, recipes and tagged cucumber, Japanese, rice, under $2, vegan, vegetarian. Bookmark the permalink.