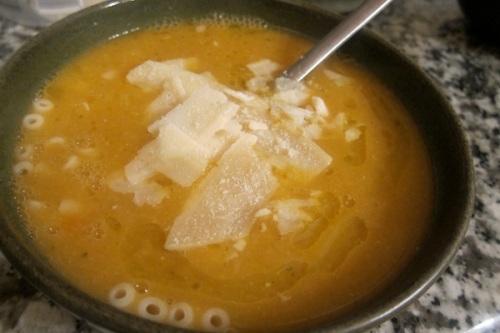 Bean soup. If you’re on a budget, you’ve probably had more than your fair share of it, as it’s easy, inexpensive, healthy, and filling. It can also be kind of depressing. This soup to the rescue! It happens to be my absolute favorite bean soup of all time. It’s not overtly beany, with a smooth bisque texture and tons of flavor from both the soup base and the rosemary oil, plus pasta for textural and visual interest. This recipe makes a TON for around 5 bucks total, so you can freeze the soup base and make up a new batch with new pasta (the rosemary oil keeps a while in the fridge) whenever you feel like it, or, ideally, when you happen to have some hot, fresh crusty bread at the ready.

As below, it makes about 8 servings. Recipe adapted from “Deborah Madison’s Vegetarian Cooking for Everyone.” She suggests both navy and cannellini beans and leaving them whole, so if that’s your bag, go for it, but I prefer the elegance of the purée.

Make the rosemary oil first so it can steep while the soup cooks. You may want to consider making a double batch, because it’s not only phenomenal on the soup, but brushed on grilled-cheese sandwiches or toast, in salad dressing, drizzled on other soups and meals… you get the idea. 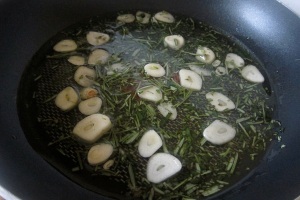 In a small skillet, warm the oil with the rosemary and sliced garlic until the garlic is just starting to turn golden. Set aside. (The garlic will get kind of translucent and weird-looking as it sits. This is fine.)

Cover the beans with boiling water and set aside.

Heat the 2 T oil with the chopped rosemary in a large soup pot or Dutch oven with lid over medium heat, until fragrant. Add the onion, carrot, celery, and a pinch of salt and cook until softened, about 8-10 minutes. (Deborah does not advise adding salt until the end, presumably out of fear the beans won’t soften, but I haven’t found this to be the case, so I still advocate seasoning as you go.)

Add the garlic and parsley and cook until fragrant. Drain the beans and add to the pot. Stir in the tomatoes and chicken stock/vegetable broth/water, bring to a boil, reduce to a simmer, and cook until beans are tender, about 1 1/2 hours.

Strain the rosemary oil. Cook the pasta in a large pot of boiling, salted water until al dente. Drain. (As I mention above, if you can’t find tiny shapes, check out the Mexican section; they’ll usually have a variety of tiny shapes in 7-ounce bags for like 30 cents.)

Puree the soup with an immersion blender or in batches in a regular blender until very smooth (be sure to test this before you stop, as it can be grainy if you don’t blend long enough). Put back on the heat, bring to a simmer, and season to taste with salt and pepper.

To serve, put a handful of pasta in a bowl. Cover with the soup puree, add lemon juice to taste. Drizzle with rosemary oil and top with cheese.

This entry was posted in Italian, recipes and tagged beans, cheese, Italian, rosemary, soup, under $1, vegetarian. Bookmark the permalink.