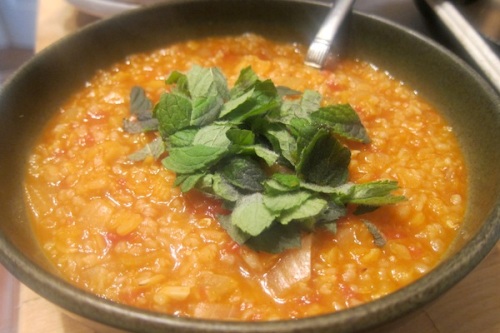 Few things are more healthily filling than the combination of bulgur and lentils, and few things are more simple and inexpensive to make than soup. Why not combine them? (And use up some more of the weed-like mint that has now aggressively popped up in almost every part of the garden?) This soup certainly won’t win any awards for innovation, but it’s warm, comforting, and so hearty that B. and I were completely stuffed after our single 63-cent servings.

As below it makes 4 large servings. Crusty bread for sopping optional.

Heat the olive oil and butter in a large soup pot over medium heat. Add the onion and a pinch of salt and cook until translucent, about 5-6 minutes. Add the garlic, paprika and cayenne and cook until fragrant, about a minute.

Add the tomato paste and cook until starting to brown.

Add the tomatoes, chicken or vegetable broth, lentils, bulgur, and 3 cups water, deglazing the bottom of the pot, if necessary.

Bring to a boil, reduce to a simmer, and cook, covered, for about 30 minutes, or until bulgur is soft but still very slightly chewy. (Your version might look soupier than mine; I used what I ended up feeling was too much bulgur, so I reduced it to 1/2 a cup.) Stir in the lemon juice and season to taste. Serve garnished with mint.