I make quite a few savory dinner soufflés on the $35-a-week budget, both because we can use our backyard hens’ eggs and because it’s a great blank canvas for odds and ends. This week’s stockpile consisted of a few stray frozen strips of bacon and a nice, firm celery root I bought after failing to locate any other appealing in-season vegetables. (It probably doesn’t help that I hate asparagus, which is everywhere right now. How someone decided that stuff was edible will forever be beyond my comprehension.) I knew the two flavors would work well together after the success of February’s celery root and beer soup, so I figured I’d try them out in a new format. I have to say, it definitely worked; roasting the celery root allowed for a concentrated-enough flavor to stand up to the bacon, and using bacon fat as a base for the béchamel infused the whole thing with noticeable but unobtrusive hints of pork and smoke. Très délicieux!

We usually make soufflés in one large 1-quart ramekin, but if you’d rather use individual ramekins, it should fill 4 or 5. (2 main-course servings.)

Peel the celery root (cutting off the scraggly brown hairy parts as you go) and cut into 1-inch pieces. Toss with a splash of olive oil and a pinch of salt and pepper. Spread on a baking sheet and roast until tender and edges are starting to caramelize. I admit I did not take note of how long this took, but it couldn’t have been very long…20 minutes, perhaps, depending on thickness.

While still warm, press the cubes through a ricer or food mill (or somehow otherwise get it into a mashed consistency). Set aside.

Butter your ramekin(s) thoroughly and coat with bread crumbs so the soufflé doesn’t stick to the sides and can rise freely.

Cook the bacon over medium heat until crisp and all fat has rendered. Drain on a paper-towel-lined plate. Chop into small pieces.

Pour 3 T of the fat (if you don’t have enough fat, supplement some extra if you keep a can in the fridge, or substitute butter) into a medium saucepan. Heat over medium, add 3 T flour, and stir until a roux has formed.

Cook, stirring constantly, until roux is a light brown color, about 5 minutes. Slowly whisk in the milk, stirring constantly, until mixture has thickened. Reduce heat to medium-low and simmer for about 5 minutes or until very thick, stirring often. Add the Tabasco. Remove from heat and stir in the cheese, bacon pieces, and reserved celery-root mash. Season to taste with salt and pepper. (Your base might be smoother than this if you used a food mill.)

Separate the five egg whites into a VERY CLEAN bowl or bowl of a stand mixer (even if you think it’s clean, you may want to wash it again first; even a speck of grease can cause your eggs not to fluff up. Along those lines, if you get a speck of yolk in your whites, you’ll have to start over. I know it sucks, but I promise this is the hardest part of soufflé making, and it’ll make you really good at separating eggs) and stir the four yolks, one at a time, into the béchamel-celery root mixture. Reserve the fifth yolk for another use.

Add a pinch of cream of tartar to the whites to stabilize them and beat with a mixer until they’re forming stiff peaks but are still glossy. 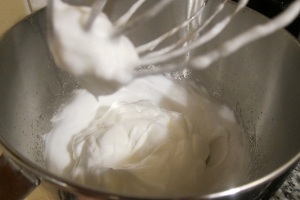 With a rubber spatula, remove about 1/4 of the whites and fold into the béchamel-celery root mixture to lighten it. Pour the now lightened mixture back into the whites and fold lightly with the spatula to combine. Don’t stir too vigorously; it’s best to have some streaks of white than to end up bursting all the egg-white bubbles. The mixture should be light and quite foamy. Pour it into the prepared ramekin(s) and place in the oven. Reduce heat to 375 F and cook (do not open the door) until risen and top is starting to brown. For the large ramekin this will be about 35 minutes; for the smaller ones I’m guessing closer to 20, but keep a close eye.

Remove from oven and serve immediately, as it will start to deflate as soon as you take it out. (For the large ramekin, I just scoop large portions out and serve it on a plate with lettuce from the garden.)