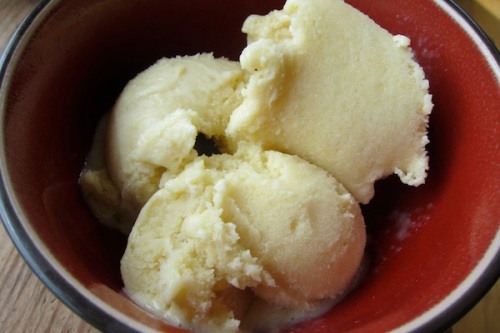 Believe it or not, this ice cream was not born of a pregnancy craving. It was born of the arrival of a new ice-cream maker to replace our Kitchen Aid stand-mixer attachment, which ceremoniously sprung a leak around the time I became pregnant and REALLY could’ve used some ice cream. I was so excited to finally have ice cream again that I didn’t care what kind it was—I just wanted it now. Apples were the only fruit we had on hand, and a quick perusal of Epicurious confirmed they have been paired with white miso before in desserts, so onward I pressed with the idea. Was it a good idea? The jury’s still out. It tastes exactly as it sounds—sweet and apple-y, with a salty, umami undertone of miso. I think my taste buds were more confused than anything else. For that reason I don’t necessarily recommend it as a pregnancy dessert (a time when one doesn’t exactly need any more confused body parts), but it would probably make a great palate cleanser in between courses of an Asian meal, or unexpected dinner-party dessert.

Recipe adapted from Epicurious. Makes about 12 small servings. I recommend not even tasting it until it’s thoroughly hard-frozen. 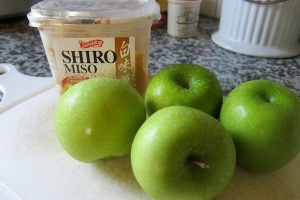 In a medium saucepan, melt 3/4 cup of the sugar over medium heat, stirring often, until melted and caramel-colored. Add the apple chunks and stir well to coat. (If your caramel immediately creates an enormous, hard chunk on the spoon, just do your best to scrape it off and get it to re-melt.) Cook until apples are soft, about 10 minutes. Add mixture to a blender with the miso and purée. (You may be tempted to taste it at this point. Again, I advise not doing so.)

Pour 1 cup of the cream into a medium-large bowl set in a larger bowl full of ice. Set a strainer over the top.

Whisk the egg yolks in another medium bowl.

In a medium saucepan, heat the milk, remaining cup of cream and 1 cup of sugar until sugar is dissolved (stirring occasionally) and milk is steaming, but not simmering or boiling. Once milk is steaming, pour slowly into the bowl with the yolks, whisking all the while. The goal is to temper the yolks, not cook them.

Pour the mixture back into the saucepan and, over medium-low heat, stir with a wooden spoon until just thickened enough so you can draw a line through the mixture that coats the back of the spoon. The camera steamed up when I tried to take a picture, but I’m using it anyway, because it’s helpful to see if you’ve never done this before.

Immediately stir in the apple-miso purée from the blender and pour into the strainer over the bowl of chilled cream, stirring as you pour to incorporate. (Depending on how awesome or un-awesome your blender is, you may have to press some of the solids through with a rubber spatula.)

Put the mixture in the fridge to chill, preferably overnight.

Churn in your ice-cream maker according to manufacturer’s instructions. 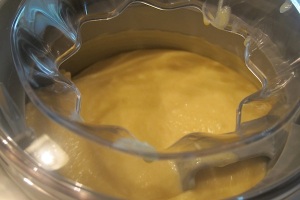 This entry was posted in recipes, splurge and tagged dessert, fruit, ice cream, under $1. Bookmark the permalink.