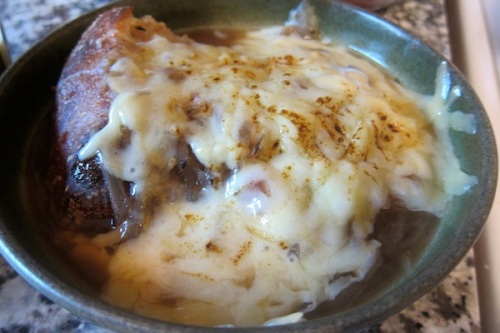 For some reason I’ve been really craving French onion soup this week. Trashy French onion soup—extra-cheesy, extra sweet. It’s been hot (read: not soup weather), but as anyone who’s been pregnant knows, once there’s a craving, it doesn’t ever really go away until it’s fulfilled. The budget obviously precludes going out and ordering food at a restaurant like a normal person, so my only solution was to spend part of an 80-degree day sweating over the stove. Thankfully, it was worth it. This is a much different take on the French onion soup I made a few months ago; sweeter, with a little smoke from added bacon. (In the past I’ve complained that bacon overwhelms the soup, but this time I only added a tiny bit and it was perfect.)

As below it makes about 6 pregnancy servings; possibly more normal servings. I brought it to work as leftovers with all the components separately packaged—simply put a piece of bread in the soup with some cheese over it and microwave it. Recipe adapted from Anthony Bourdain’s Les Halles Cookbook.

*Mine wasn’t tied very well because I was being cheap with the butcher’s twine, but it stayed together.

Heat a large, heavy soup pot or Dutch oven over medium heat. Add the butter, and once melted and starting to brown a little bit, add the onions and a large pinch of salt. 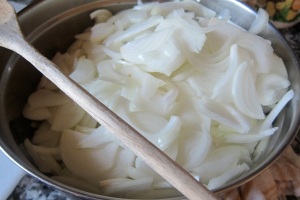 Now here’s the boring part: Cook the onions (uncovered), stirring occasionally, until totally caramelized, brown, and nearly a single layer on the bottom of the pot. It should take about an hour to an hour and a half. Don’t even think about trying to cut corners on this, because it’s onion soup. If you mess up the onions,  you’ve got nothing—trust me. If you don’t want to stand around and wait for this to happen, use the method I detailed in the French onion soup with Guinness: Cover the pot and put it in a 400-degree oven for 2 1/2 hours. It’ll take a lot longer, but you can forget about it while you do something else.

Here they are almost done.

When you’ve waited as long as you can stand it, deglaze the pot with the port and balsamic vinegar.

Add the beef broth, bacon (yes, uncooked), and bouquet garni, bring to a boil, reduce to a simmer, and cook for 45 minutes to an hour, skimming foam, grease, and risen butter off the top with a spoon.

If you haven’t already toasted your bread, or it’s too big to fit in the toaster, bake it in a 325-degree oven until it’s nice and crusty.

When the soup is done, ladle it into broiler-safe bowls, add a bread toast, and cover with cheese. Put under the broiler until cheese is melted and bubbling. If you don’t have broiler-safe bowls, put the cheese on the bread and put the bread under the broiler, then plop into the bowls. You can try bruléeing the top to get the cheese to melt, as I did, but you most likely will end up burning it and making it taste funny.

One response to “French onion soup with bacon: $1.52/serving”