As you may have noticed, watermelons are cheap right now. Like, really cheap. They’re also very large. Like, the size of a small child and 39-cents-a-pound large. Which is great if you’ve got a huge family or plan on putting slices out for a barbecue, but what to do if you’ve got a household of two people who struggle to eat 12 pounds’ worth of watermelon in a week? Buy a cheaper, smaller watermelon that probably costs three times as much per pound? Of course not! Buy the big watermelon, eat half of it, and make this sorbet with the other half. It’s one of the most refreshing summer desserts there is, and if you buy mini chocolate chips (which I didn’t this time), it even looks just like watermelon, which for some reason makes it taste even better.

Recipe adapted from David Lebovitz’s The Perfect Scoop. As below it makes about 4 servings (I admit my perception of a “serving” has become increasingly skewed by pregnancy, so I apologize if this is actually something like 6 normal-person servings; I honestly have no idea anymore), but if you’re using a whole half of a watermelon, as I was this time, you’ll probably have to triple the recipe and make it in two batches. 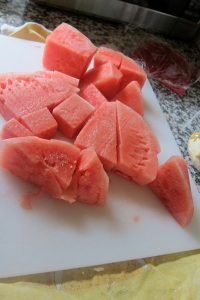 *By the way, can you even BUY seeded watermelon anymore, or have we become so infantilized as a society we can’t even handle fruit unless all of it is ready-to-eat? Just wondering. Oh, and get off my lawn and all that.

Chill, then mix in your ice cream maker according to manufacturer’s instructions. Add the chocolate chips during the last 5 minutes of churning.

This entry was posted in recipes, splurge, summer and tagged dessert, fruit, under $1, vegan, vegetarian. Bookmark the permalink.