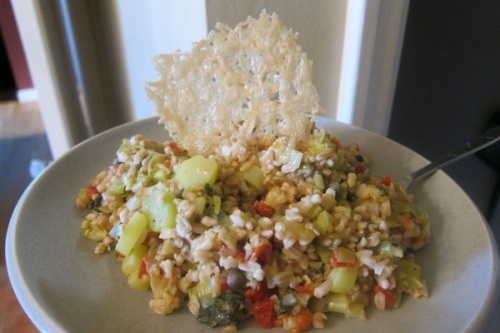 This is another hot-weather whole-grain salad in the vein of the whole grain & celery salad I posted back in April; it can be served cold or at room temperature, and there’s no danger in letting it sit out awhile since there’s no meat or mayo. When I devised the Parmesan crisps I had the idea they could be broken up over the salad, but they were more pliable than I thought they’d be, so you could even turn them into edible scoops or bowls for hors d’oeuvres. Use them as you see fit, or eliminate them altogether and substitute some grilled slices of non-budget-friendly haloumi cheese, as is featured in the original recipe from Maria Speck’s Ancient Grains for Modern Meals.

As below it makes about 3 decent-sized servings.

Combine the 1 cup whole grains with 3 cups water and a pinch of salt in a medium saucepan. Bring to a boil, reduce to a simmer, cover, and cook until soft but still slightly chewy, about 45 minutes.

Meanwhile, combine the sliced leeks and chicken broth or stock in a medium saucepan, bring to a boil, reduce to a simmer, and cook until softened and almost all broth is absorbed, about 8-9 minutes.

Combine the leeks with the mint, capers, fennel seeds, sun-dried tomatoes, about 1/4 tsp fine sea salt, and a large pinch of pepper in a serving bowl. 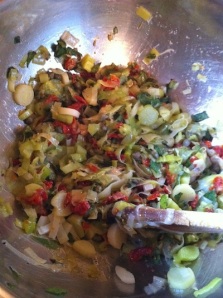 When the grains are finished, drain them and toss with the ingredients in the serving bowl.

To make the cheese crisps, preheat oven to 375 F. Arrange a couple tablespoons of grated cheese in little piles on a Silpat- or parchment-lined cookie sheet (make them as big or as small as you’d like). Cook until melted and starting to harden a bit, about 8 minutes. 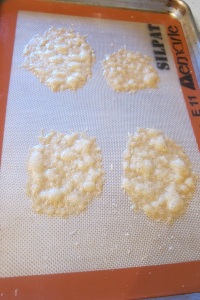 Let cool. You can decoratively stick them into the salad to be broken up, as I did, or when they’re still slightly warm, you can form them, tuile-style, into little scoops or bowls.

This entry was posted in Mediterranean, recipes, summer and tagged cheese, Mediterranean, mint, under $2, vegetarian, whole grains. Bookmark the permalink.