Though these aren’t the best-ever potstickers, which by definition must involve pork*, they just might be the best vegetarian/vegan potstickers. Two kinds of flavorful mushrooms (or more, depending on your budget) sautéed with green onions, cilantro, soy sauce, sherry, sugar, and oyster sauce (or vegan oyster sauce), and that’s it. They’re easy enough for a weeknight meal if you’re used to making potstickers by hand, or a great appetizer choice for a mixed-crowd dinner party or potluck. You’ll never go back to the processed, frozen-in-a-bag kind again.

*Did you know pork is dramatically cheaper per pound than mushrooms? Because it is.

Filling recipe adapted from Ellen Leong Blonder’s Dim Sum. As below it makes about 25-30 potstickers; about 3 light-meal-sized servings.

Soak the shiitakes in hot water for 30-40 minutes, or until fully softened. Wring out the water (save the soaking liquid—freeze it if necessary—as mushroom stock) and chop finely.

Heat a medium-large skillet over medium-high heat. Add the oil. Add the chopped mushrooms, green onions and cilantro and cook until most liquid has evaporated, about 5-6 minutes.

Reduce heat to low and stir in the oyster sauce, soy sauce, sherry, sugar, and pepper. Cook for about a minute. Add the cornstarch slurry mixture and mix until well combined. (This gives it some cohesion so it makes a proper dumpling inside the wrapper.) Remove to a bowl to cool. 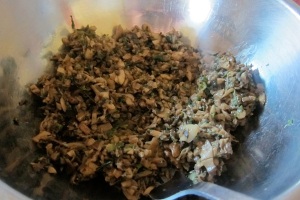 Spread out about a half dozen gyoza wrappers on a clean, dry surface, keeping plastic wrap over the rest of them so they don’t dry out. Keep a  little bowl of water handy. Place a heaping teaspoon of filling in the center of the wrapper. 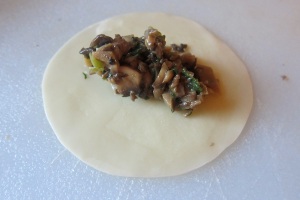 Dip your finger in the water and wet the very outer edge of the gyoza wrapper, all the way around. Fold the wrapper in half, pinch the sides together, and carefully pleat. (My spatial-relationship-impaired, right-brained attempt to explain how to do this will probably be more confusing than your trying to figure it out on your own. It’s not hard at all; just use the photos of how they should look as a guide.) Place the finished potsticker on a clean, dry surface, like a cookie sheet, and keep covered with plastic wrap or a kitchen towel. Repeat until all the filling is gone.

To cook, heat a large skillet over medium-high heat. I actually like to use a nonstick skillet, because once the potstickers…well…stick, they’re really hard to get off, and you will end up with a lot of ripped and torn ones. Add about 1/2 T of oil (1 T+ if you don’t have a nonstick skillet), when hot, add as many potstickers as will fit in a single layer without touching. Add enough water to come about 1/2-inch up the sides of the skillet (stand back when you do this), cover it, and let cook until all the water has evaporated, about 3-5 minutes. If you’re using a regular skillet, you may have to shake it a few times to make sure the potstickers don’t glue themselves to the bottom. It may take you a couple of rounds to learn exactly how long they take to cook; take one out and taste it if you’re unsure. The bottom should be browned and crispy and the wrapper should be translucent.

Stir the dipping sauce ingredients in a bowl and whisk until sugar is dissolved.  Serve and enjoy.

This entry was posted in Chinese, recipes and tagged Chinese, mushrooms, under $2, vegan, vegetarian. Bookmark the permalink.