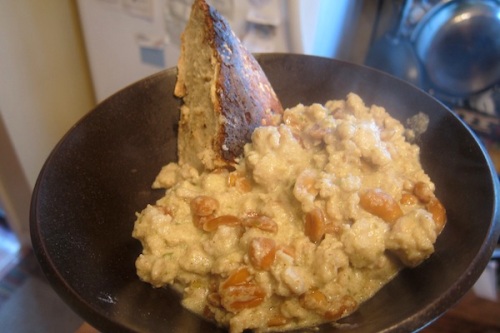 It’s been hot lately. Like, triple-digit hot. Which, for someone who’s almost seven months pregnant and doesn’t have air conditioning, means suddenly entering a special circle of hell. A place where every appendage on your body feels like it weighs 3,000 pounds and sweat comes out of places you didn’t even know had sweat glands. Some nights I admit I didn’t cook at all; others I simply threw a banana, some ice and frozen berries, and some yogurt into a blender and called it a day. This is also one of the only meals I’ve made lately that isn’t something I’ve already posted on the blog. It’s quite similar to one of my favorite weeknight dishes of all time, pozole verde, but with a sweet-and-umami kick from peanuts and Parmesan cheese. It’s a great way to use up inexpensive cuts of chicken—just grind them up in the food processor.

Recipe adapted from James Villas’ From the Ground Up. As below it makes about 4 servings. This recipe also marks the first time we’ve been able to use some of our pepper harvest. Sadly, it’s because some of the peppers blistered in the heat so I was forced to harvest them prematurely. (Shown here with some wax beans.) 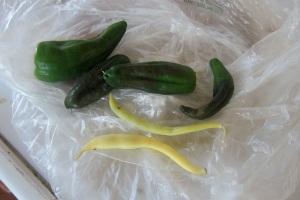 I served it with some leftover bread, but it’s also great on its own.

Puree the onions, garlic, peppers, chicken broth or stock, and a pinch of salt in a blender. 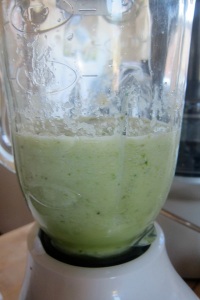 Heat the oil over medium-high in a large, wide pot with a lid. Brown the chicken. (This will take longer than you think, since 2 pounds is a lot of chicken. Be patient.) Add the puree and cook until almost evaporated, about 10 minutes. Add the allspice and cumin and stir until fragrant. Add the evaporated milk, Parmesan, and peanuts.

Season further to taste. Cover and simmer for about 30 minutes, until smooth and creamy.

This entry was posted in Peruvian, recipes and tagged cheese, chicken, peanuts, Peruvian, stew, under $3. Bookmark the permalink.