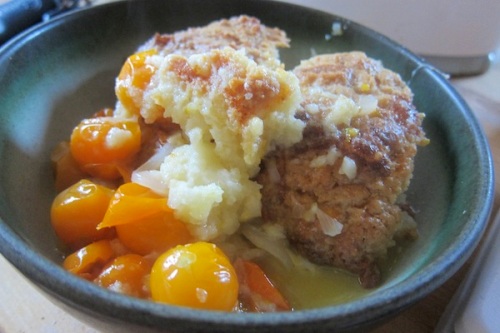 Regular readers of this site know I’m a big fan of savory baking. It’s efficient, it’s delicious, and if you happen eat it all, oh well—it’s dinner! I’ve been wanting to make this particular cobbler for a couple of years now, given that it calls for three pounds of cherry tomatoes. I certainly knew I wouldn’t be buying those tomatoes in the store, so I’d have to wait until a year I could grow them myself. As it so happens, this is the year. Our plants have been so fecund that harvesting three pounds of sun golds only took a couple of days. If you yourself have a surplus of cherry tomatoes, or don’t mind going out and buying them, this is perhaps one of the best places for them to end up. Oven roasting brings out a sweet tartness that contrasts with the topping of rich, creamy cheese biscuits, and, provided you grew your own tomatoes, the whole thing costs less than $4 to make.

Recipe adapted from Martha Stewart. As below it makes about 6 servings.

Heat the oil in a large skillet over medium heat. Add the onions and cook until caramelized and brown. (This takes at least half an hour.) Add the garlic and cook until fragrant.

Toss the onions with the tomatoes, flour, and red pepper flakes, adding about 1 1/2 tsp salt and black pepper to taste. 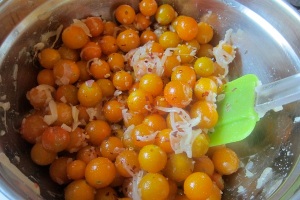 To make the biscuits, combine flour, baking powder, and 1 tsp salt. Sprinkle the butter pieces over the top and either incorporate them with a pastry cutter or rub them into the flour with your fingers until the mixture becomes pebbly. Add the cheese, then stir in the cream. The whole thing at this point will be extremely heavy and sticky and look like it’s not going to fit in the Pyrex, but trust me, it will work out.

Spread the tomato mixture into the Pyrex and drop the biscuits in about 7 large clumps (about 1/2 cup worth each) on top, leaving a little room in the middle so they can expand. Brush the top of the biscuits with cream. Put the Pyrex on a cookie sheet (it will bubble over) and bake for about 1 hour and 10 minutes, or until the filling is bubbly and the biscuits have browned.

Let cool on a rack for about 20 minutes before serving.

This entry was posted in recipes, summer and tagged bread, tomatoes, under $1, vegetarian. Bookmark the permalink.