As mentioned in previous posts, we were gifted a family-sized CSA box a few weeks ago, and were able to make use of every single item in it…except for half a bunch of dill. (The other half went into two loaves of dill-olive bread.) Dill is pretty far down the list of my favorite herbs. In fact, it may well be at or near the bottom. It’s mostly known for going well with seafood, which I hate, and/or eggs cooked by themselves, which I also hate, leaving few options for use (other than pickles, of course). Luckily I was able to find one. Yes, it’s a stew, which isn’t exactly the most appealing meal in late August, but the yogurt and dill combine to give it a coolness that somehow seems perfectly appropriate.

*Buy the big tub and use the rest for frozen yogurt: Mix 3 cups of it with 3/4 cup sugar and 1 tsp vanilla extract, then churn in your ice-cream maker. It’s perfect by itself, but also great topped with peaches or blackberries.

Bring 2 cups water, the barley, the lentils, bay leaf, and dried chile to a boil. Decrease to a simmer, cover, and cook for 20 minutes. All the liquid should be absorbed. (This step can be done ahead.) 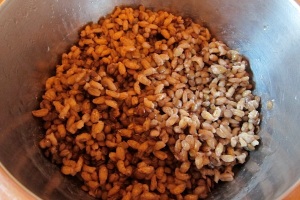 Heat the oil in a large saucepot over medium heat, add the prosciutto or bacon and cook until crisp. Remove about 1/4 of it and set aside on a paper-towel-lined plate. Add the leeks, mushrooms and garlic to the pot.

Cook until the mushrooms have released their liquid, about 5 minutes. Add the marjoram and oregano and cook until fragrant; stir in half the dill. Add the vegetable or chicken stock, 1 cup water, 1 T soy sauce, and salt and pepper to taste. Bring to a boil, reduce to a simmer, and cover. Simmer, covered, for about 20 minutes or until barley is softened but still slightly chewy. Season with remaining 1 T soy sauce and more salt and pepper to taste.

Stir in spinach or chard leaves and let sit until wilted.

Serve with a dollop of yogurt and sprinkle of reserved prosciutto and dill.