Apologies for the late post, but I have officially entered into the late stage of pregnancy where standing on my feet, at the counter, for long periods of time has gotten almost unbearably difficult. I’m still cooking, mind you, but it’s more in the vein of throwing things together based on the garden and pantry and hoping they cohere enough to be edible before I have to go sit down. The resulting “recipes,” if I remember them at all, are rarely innovative or tested enough to warrant inclusion on the blog. The last thing I made that would be worth your time and trouble to re-create was this roasted tomato dish, utilizing what appears to have been the last big tomato harvest of the summer. It’s nothing fancy, just a big ol’ pile of heirlooms and a few handfuls of sun golds (or whatever tomatoes you have on hand), roasted in olive oil to concentrate their sweetness and topped with basil-garlic bread crumbs. I served it over pasta, but it would also be great over polenta or on bread as a sort of bruschetta.

First off, before we get started, CAN YOU BLAME ME? This is not comfortable, folks. Me cooking right now is akin to releasing an injured and developmentally delayed water buffalo into our tiny shoebox of a kitchen. But I’m still doing it, and we’re still living on $35 a week. Do I feel I deserve a medal? Yes. Yes, I do. 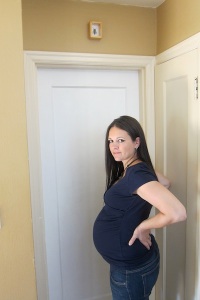 Anyhow, as below, the recipe makes about 4 servings as an entree. Be forewarned this is not a weeknight meal—the tomatoes take a couple of hours to roast. (Adapted from Faith Durand’s Not Your Mother’s Casseroles.)

Spread the tomatoes in the bottom of the Pyrex dish. Sprinkle on the garlic and salt and pepper to taste, pour the olive oil evenly over the top. Stir to distribute more evenly, if desired. 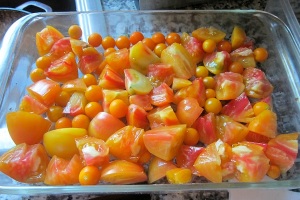 Roast uncovered for about 2 hours. If you’re not using paste tomatoes, the tomatoes will have released quite a bit of liquid. Don’t be alarmed—the bread crumbs will absorb it and crisp right back up. 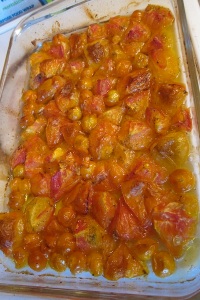 Meanwhile, combine the bread crumbs, basil, garlic, and olive oil in a food processor. Process until combined. If your bread wasn’t salty to begin with, you might want to add a little to taste.

When the tomatoes are done, sprinkle the bread crumbs over the top and roast at 450 F for another 20-30 minutes, until top has browned.

Meanwhile, cook the pasta in boiling salted water until al dente and drain. Mix in the tomato mixture. (Or serve over polenta or toasted bread. See here for instructions on how to make polenta from cornmeal.)

This entry was posted in Italian, recipes, summer and tagged bread, Italian, tomatoes, under $1, vegan, vegetarian. Bookmark the permalink.

12 responses to “Roasted-tomato topping for pasta, bread or polenta: 39 cents/serving”