Money Saver: bake your own bread 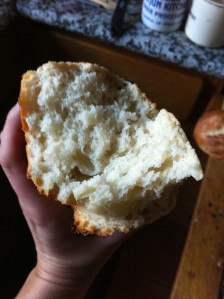 Some readers may know  I recently finished helping edit a bread cookbook for a well-known local chef/ baker/ restaurateur/ James Beard finalist. (Click here to pre-order a copy. If you’re a fan of the no-knead technique, it will change your life.) I knew a fair bit about bread before I took on this project, but the past few months have been pretty much all bread, all the time.

In fact, for both research and educational purposes I’ve probably baked more loaves of bread this year than most people bake in their entire lives. I go through 25-pound bags of flour in a matter of weeks.

This has actually been of great benefit to the $35-a-week project, as it’s provided us with an inexpensive source of sandwich bread, soup thickener—or a complete soup!—bread crumbs, and overall meal stretchers (each loaf costs about 33 cents). It’s also freezable in individual portions—just pop it in the toaster and you’re good to go. In fact, I don’t know how we’d be able to pull off our budget without it—many a lunch has consisted of a hunk of sourdough and a couple pieces of fruit. It has also taught me that weekly bread baking is totally doable so long as you plan ahead and build it into your schedule. 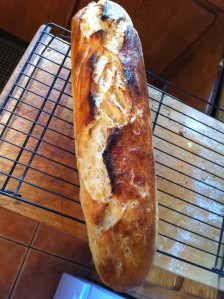 Each requires a completely different process, with steps that take place on different days, so it can get pretty complicated. (On top is the sourdough starter warming up after a few days in the fridge, and the final dough rise for the baguettes in the bottom container.)

Check back in the future for specific steps on how to make each bread, but in the meantime, this process, using a poolish, is similar for the baguettes (rising, below)…

…and this one, involving a starter, is similar for the boules (fermentation in progress, below). To get your own sourdough starter going, click here.

If you don’t like the particular instructions/sites agove, there are countless others patiently awaiting your Google search.

You do need at least a baking stone for the baguettes (I also have a baguette pan, but you can certainly make do without), but if you can’t find or afford one, plenty of people use inexpensive tiles from the hardware store.

You also need a Dutch oven for the boules—it doesn’t have to be Le Creuset, as Target, Wal-Mart and Macy’s all carry inexpensive knockoffs—but any heavy, oven-safe pot will do in a pinch.

I highly recommend trying one of these breads at least once, even if you think you’re not the baking type (because lord knows I’m not—have you ever seen uglier-looking loaves of bread in your life?) or have been disappointed with home-baked bread results before. You would not believe how much money can be saved by integrating home-baked bread into your pantry, and you will never go back to preservative-laden store-bought bread again. And if you’re worried about white carbs, once you get the hang of baking there are myriad ways to customize the formula with various whole grains. Win-win!

This entry was posted in basics, money saver and tagged bread, under $1. Bookmark the permalink.