No sense beating around the bush: I like beer. A lot. I also have not had any beer for a long time. In fact, it’s been quite a while since I’ve had any alcohol (or caffeine) at all due to a   attempt to live and work more mindfully. Not that I drank that much before (although I did drink too much coffee by anyone’s standards), but couple of beers a few days a week went a long way. You’d think it would get easier the longer you go without, but it actually seems to get worse as time goes on, especially when it comes to coffee. In fact, I apologize to all who’ve had to work with or talk to me in the past week. I thought this dish would allow me a way of finally having beer without actually drinking beer, but instead it caused a great deal of angst and emotional trauma for its requiring me to purchase a large bottle of beer—sweet, wonderful beer—only to pour every last drop of it into a pot of beans. Thankfully for these beans, as well as my sanity, it was actually worth it. These are some of the best beans I’ve had in a very long time, and they do have a pronounced ale flavor.

Martha recommends Blue Moon or Hoegaarden for the beans, neither of which were available at our corner market (the former is owned by Coors, so I’m kind of surprised), so I chose a 22 oz. bottle of Widmer’s Drifter Pale Ale. It turned out to be a pretty good choice.

*Extra slices can be frozen and reheated in the microwave for a great breakfast or snack.

In an oven-safe pot with a lid, cook the bacon over medium heat until crisp. (Make sure it’s actually very crispy, not just flaccid and somewhat rendered. If you need to reduce the heat to medium-low to keep it from burning, do so. Just turn it back up to medium when you add the onions). Remove to a plate lined with paper towels, leaving about 2 T bacon fat in the pot. If there’s at least a tablespoon of extra grease, save it for coating the skillet for the cornbread, below.

Add the onion and garlic, cook until onion is translucent, about 5 minutes. Add the honey and Dijon, cook for about a minute, then add the rosemary, beer, beans, and broth. Season to taste with salt and pepper. Bring to a boil, cover, and put in the oven. Cook for about 2 hours, until beans are softened and most of the liquid has been absorbed. Remove the rosemary sprig, which by now will have probably shed all its needles. Keep the beans warm while you make the cornbread. Just before serving, stir in the reserved crisped bacon for crunch. 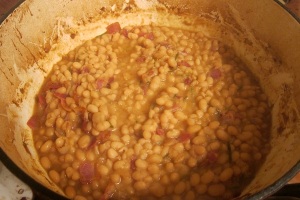 Pour a tablespoon or two of the reserved bacon fat from the beans—OR from 4 slices of bacon cooked in another skillet over medium heat until crisp—into the cast-iron skillet and swirl it around until the bottom and sides are coated. Put the skillet the oven for about 5-6 minutes until very hot. If you cooked the bacon strips, chop them into smaller pieces if desired.

Remove the skillet from the oven and pour in the batter—it should sizzle loudly. Place back in the oven and cook for 20-25 minutes, until a toothpick inserted into the middle comes out clean. Cut into wedges and serve with the beans.

*Also from Martha:
• Gemelli with mixed mushrooms and thyme

This entry was posted in recipes and tagged almost meatless, bacon, beans, beer, bread, under $2. Bookmark the permalink.